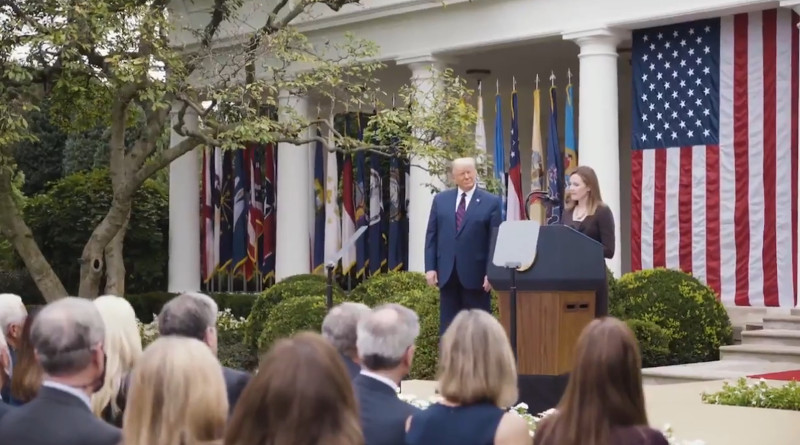 U.S. President Donald Trump on Saturday nominated Amy Coney Barrett to fill the Supreme Court vacancy left by the death of liberal Justice Ruth Bader Ginsburg, giving him an opportunity to make the court more conservative ahead of the November 3 presidential election.

Calling Barrett “one of our nation’s most brilliant and gifted legal minds,” Trump, making the announcement in the White House Rose Garden, declared her “very eminently qualified.”

The president said he believed it “should be a straightforward and prompt confirmation,” and urged lawmakers and media to refrain from personal and partisan attacks on Barrett.

Answering questions later from reporters on the South Lawn, the president said it would be “very, very hard” for Democrats to give the nominee a tough time because of her qualifications.

Polls show a majority of Americans, as well as Democratic lawmakers, want the winner of November’s presidential election to select the nominee. Asked about that by VOA, Trump replied: “I don’t think they know Amy” and predicted, “I think this will be done before the election.”

Earlier, White House chief of staff Mark Meadows told reporters he was “not confident” of that timeline, adding that the timing of the confirmation “would be a discussion for the senators. I would believe that they’re going to try to move through the process and review her credentials in an expeditious manner. And if they do that, based on the resume that I’ve seen, hopefully she would get confirmed before the first of November.”

Speaking at a Saturday night rally at Harrisburg International Airport in the election battleground state of Pennsylvania, the president told the cheering crowd that Barrett “will defend your God-given rights and freedoms.”

Trump had promised to nominate a woman to succeed Justice Ginsburg, who died last week at age 87.

Barrett, the mother of seven, if confirmed, would be the first mother of school-age children to serve on the nation’s highest court and, at age 48, the youngest judge on the nine-member Supreme Court.

In brief remarks at the Rose Garden event, Barrett praised Ginsburg’s life of service, to women and the court.

“Should I be confirmed, I will be mindful of who came before me. The flag of the United States is still flying at half-staff in memory of Justice Ruth Bader Ginsburg, to mark the end of a great American life. Justice Ginsburg began her career at a time when women were not welcome in the legal profession, but she not only broke glass ceilings, she smashed them,” Barrett said.

Barrett, who was a clerk for the late Justice Antonin Scalia more than 20 years ago, said, “The lessons I learned still resonate. His judicial philosophy is mine, too, a judge must apply the law as written. Judges are not policymakers, and they must be resolute in setting aside any policy views they might hold.”

Trump’s Republican Party controls the Senate, meaning Barrett’s confirmation is likely to be pushed through.

Senate Majority Leader Mitch McConnell released a statement Saturday that said, “President Trump could not have made a better decision. Judge Amy Coney Barrett is an exceptionally impressive jurist and an exceedingly well-qualified nominee to the Supreme Court of the United States.”

The chairman of the Senate Judiciary Committee, Lindsey Graham, said he is “very committed to ensuring that the nominee gets a challenging, fair, and respectful hearing. We move forward on this nomination knowing that the president has picked a highly qualified individual who will serve our nation well on the highest court in the land.”

Appearing on Fox News Saturday night, Graham said he expects to send Barrett’s nomination to the Senate floor for a vote by October 26. He said it would be up to McConnell to schedule the vote.

Senate Democrats, however, quickly expressed their opposition to Barrett’s nomination and the Republican’s anticipated timeline.

“The Senate should not consider any Supreme Court nominee until the American people have spoken in November and the next president has been inaugurated,” Sen. Dianne Feinstein, the senior Democrat on the Senate’s Judiciary Committee, said.

Democratic presidential candidate Joe Biden, a former chairman of the Senate Judiciary Committee, in a statement issued Saturday, said, “Millions of Americans are already voting … because their health care hangs in the balance.”

“President Trump has been trying to throw out the Affordable Care Act for four years. Republicans have been trying to end it for a decade. Twice, the U.S. Supreme Court upheld the law as constitutional,” Biden’s statement said, adding that Barrett “has a written track record of disagreeing with the U.S. Supreme Court’s decision upholding the Affordable Care Act.”

The Judiciary Committee is planning to begin holding confirmation hearings for Barrett the week of October 12, according to administration officials. Before that, the nominee is to meet with members of the committee.

The American Civil Liberties Union, a prominent, nonpartisan individual rights organization, is calling for the Senate to defer the confirmation process until after January’s presidential inauguration.

“We urge the Senate to defer the confirmation process for her successor until after inauguration. Any other course threatens the legitimacy of the court and risks abdication of the Senate’s constitutional obligation to provide ‘advice and consent’ for Supreme Court nominations,” ACLU Board President Susan Herman said.

Barrett has drawn wide support from the conservative legal establishment.

Heritage Action for America, a conservative policy advocacy group, vowed on Saturday to activate its grassroots network in several election battleground states to push for a speedy confirmation.

“We will knock on 200,000 additional doors in the next month to harness that support,” it announced in a statement.

Barrett is a devout Catholic who is very popular among conservative evangelical Christians, arguably Trump’s most loyal supporters.

Barrett taught law at the University of Notre Dame, one of the most prominent U.S. Catholic universities, for 15 years before Trump named her in 2017 to the U.S. Court of Appeals for the 7th Circuit, which covers the states of Illinois, Indiana and Wisconsin.

Religious conservatives hope Barrett would vote to overturn the landmark 1973 decision legalizing abortion rights in the United States. While Barrett has in the past expressed criticism of the ruling, she also said during her 2017 confirmation hearing to the appeals court that she would view previous Supreme Court rulings as binding precedent.

Trump, asked on Saturday if he would like to see a conservative court ban abortion in all 50 states, replied “I never discussed that with Amy,” adding that the court itself is “going to have to make that decision.”

Democrats opposed Barrett’s confirmation in 2017, voicing concerns about the role she places on religion in her life. They cited comments Barrett made at Notre Dame, saying a “legal career is but a means to an end … and that end is building the Kingdom of God.”