Democratic Congressman David Price wants the CIA to come clean about its Rendition, Detention, and Interrogation (RDI) program which detained, interrogated, disappeared, and tortured potentially thousands of Muslims at CIA “black sites” around the world from the fall of 2001 until 2009 when its discovery led to its notorious end.

In a letter addressed to CIA director Gina Haspel last week, the North Carolina representative and chairman of the Transportation and HUD appropriations subcommittee asked for more details about his state’s role in the covert operation, requesting the release of certain classified materials pertaining to the use of North Carolina facilities and residents in the rendition process.

Price raises important questions that remain unanswered despite several years of research and pressure by activist organizations and journalists into the still elusive truth about the systematic policy of kidnapping and torture instituted via a secret memorandum signed by George W. Bush only six days after the events of September 11, 2001.

Congressman Price frames his letter to Haspel in terms of concern for the people of his home state of North Carolina, which is enough to embody at least the pretense of justice. But, given the unspeakable suffering and horrors visited upon the unknown number of innocent victims of the RDI program, Price’s late and limited election-time appeal smacks of political showmanship.

Laudable as the Congressman’s efforts may be, they still fall short of probing the darkest truths behind the RDI program, which threaten to expose the American war machine and the interests that motivate it.

Khaled El-Masri was about to ring in 2004 in one of the oldest parts of the old world when he was forcibly abducted by a crew of seven or eight armed men and held in a hotel for 23 days. It would mark the beginning of a heart-wrenching ordeal for El-Masri, a German-Lebanese citizen who never imagined his vacation in Macedonia would include a nearly five-month layover in a CIA torture facility.

According to investigators with the American Civil Liberties Union (ACLU), which filed a lawsuit on his behalf in 2007, El-Masri was chained, hooded, drugged and flown to the American-occupied city of Kabul in Afghanistan via Baghdad aboard a Boeing aircraft with a tail number registered in North Carolina. He was held in a small concrete cell inside a former brick factory outside of Kabul with no bed for the following five months, where he was beaten, tortured, and interrogated by Arabic-speaking men about his supposed and never-proven links to the September 11 hijackers. In May of 2004, El-Masri was flown to Albania and unceremoniously dumped in the foreign country to fend for himself. His story was repeated hundreds, if not thousands of times with baselessly targeted Muslims, including children and pregnant women, who were abducted by CIA-backed mercenaries under the auspices of the RDI program. The official number of victims acknowledged by the U.S. government sits at just over 100 people, but the full scope of the covert torture operation has yet to be revealed since the government’s own Committee Study of the Central Intelligence Agency’s Detention and Interrogation Program remains classified.

Nevertheless, independent studies of the RDI program have unearthed enough evidence to conclude that the scale of the illegal CIA-run operation far exceeds the tally so far. The plane used to fly El-Masri was one of two aircraft owned by a CIA front company and operated out of North Carolina in a highly-protected corner of the state’s Global TransPark – a multi-modal center that houses major aerospace manufacturing facilities, like Spirit AeroSystems and Boeing and military facilities.

The airplane in question, tail number N313P, is linked back to a small company called Aero Contractors, Ltd., which is cited in the Congressman’s letter and is at the center of many of the independent inquiries into the matter. However, Aero Contractor’s role – while significant – is much more narrow than that of the company to which the aircraft was sold to before the renditions began.

The shell in the shell

Founded in 1979 by a former pilot with the CIA’s Air America, Aero Contractors works through several shell companies. One of these companies, Premier Executive Transport Services, purchased the N313P aircraft within weeks of the RDI program’s start and performed a number of technical upgrades to the plane, including the installation of vertical fins to help it take off from short runways or rough weather conditions, as well as boosting fuel efficiency, among other tweaks to improve the airplane’s overall range.

Investigative reporter and expert in clandestine military installations, Trevor Paglen, together with ProPublica staff reporter A.C. Thompson, manage to pull the curtain back somewhat in their book, Torture Taxi: On the Trail of the Cia’s Rendition Flights, disclosing that after the modifications were made, the plane was sold to another shady outfit registered in Reno, Nevada called Keeler and Tate Management Group LLC., which they traced back to one of the most powerful lobbying firms in DC, the Paul Laxalt Group, and run by its now-deceased founder, Paul Laxalt and his brother Peter.

While Aero Contractor pilots and mechanics continued to take care of the technical operation of the aircraft, it was the CIA-front Nevada company, Keeler and Tate Management, that was in charge of the renditions and other more germane aspects of the RDI. 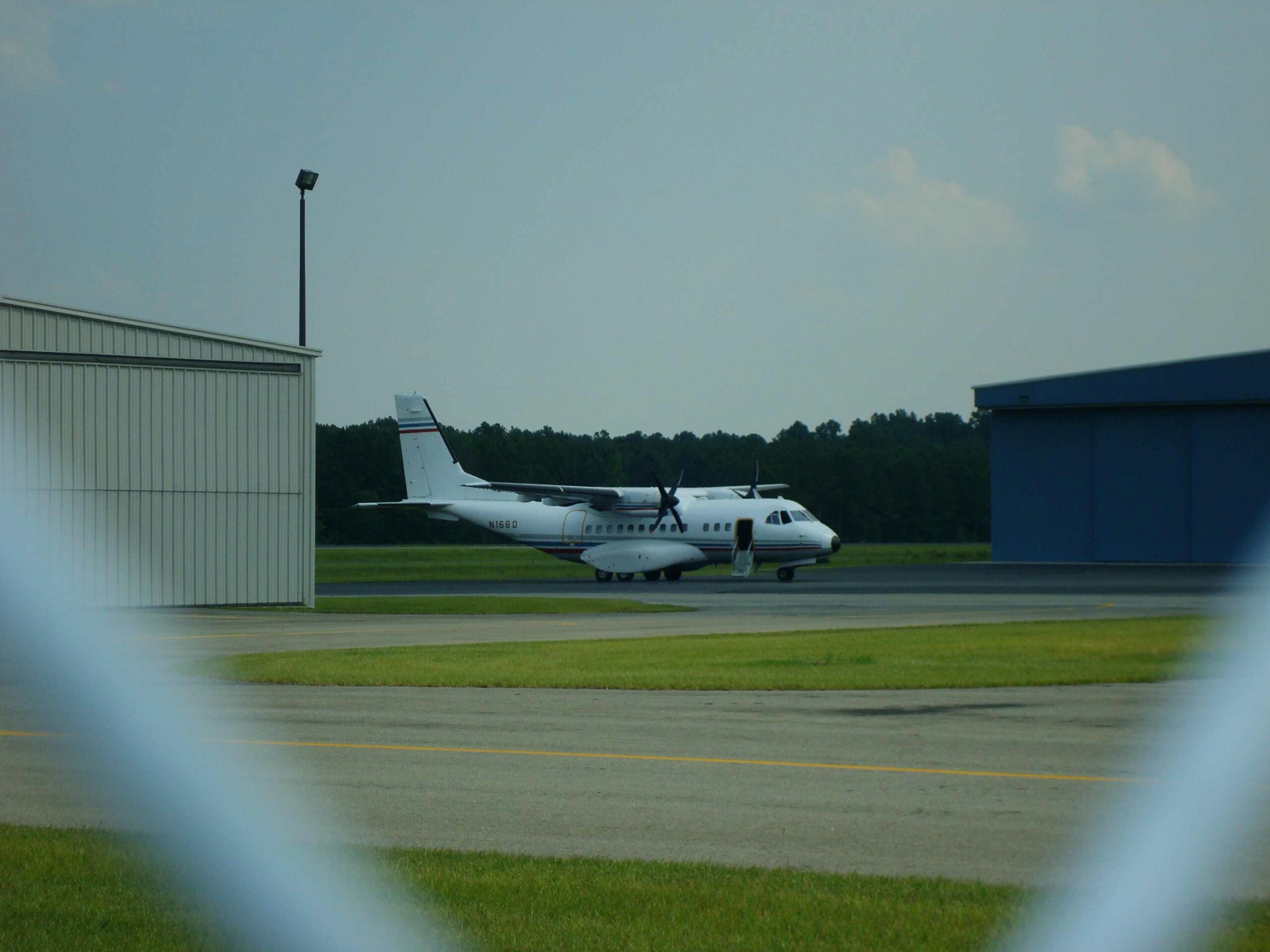 The only known photo of a CIA plane on CIA property taken at CIA leased facilities at the Johnston County Airport, North Carolina. Photo | Clayton Hallmark

The lack of attention to this particular detail speaks volumes, considering that Paul Laxalt, a former Republican governor of Nevada and one of the biggest names in the state’s politics, was also a liaison between the Senate and the White House during the Iran-Contra scandal. In addition to being a close confidant to Ronald Reagan and thrice running his election campaigns, Laxalt was also late CIA director William Casey’s good friend.

Laxalt’s lobbying firm, now run by his daughter Michelle Laxalt, has an extensive clientele and was representing many defense industry stalwarts like Lockheed Martin, Boeing, Honeywell, and many others in 2001. His relationship to the company that owned N313P and N379P – the two aircraft used to carry out over 77 illegal rendition flights, that are still unaccounted for – has been ignored by most investigations into the RDI program.

The North Carolina Congressman’s letter to Gina Haspel focuses on Aero Contractors and never mentions Laxalt or Keeler and Tate, the front company he ran for the CIA. Stopping the inquiry about one of the most egregious and coordinated abuses of human rights in modern times at the feet of a contractor seems a disservice to the truth and to the possibly thousands of illegally detained and tortured men, women, and children of Muslim persuasion.

According to annex B included in Congressman David Price’s letter to the CIA director, the mission of 77 “suspicious circuits flown” by the two aforementioned aircraft operated by Aero Contractors “remains to be determined.” It is a form of political sophistry to give Aero Contractors the benefit of the doubt, considering that all the evidence points towards the obvious.

In the rendition flight logs that have been disclosed, 49 prisoners were transported to multiple locations throughout the Middle East, Asia, and Eastern Europe. Like El-Masri, many abductees were dropped in countries they knew nothing about. Afghanistan, Egypt, Pakistan, Jordan, Iraq, and, of course, Guantanamo Bay, Cuba are among the destinations several of these victims of naked U.S. imperialism were shuttled to and tortured.

The fate of the majority of these victims is unknown and is one of the questions Price poses to Haspel. But, in light of events that have transpired in the world since 9/11 and the proliferation of ISIS and other terrorist groups, it behooves us to not fall into our own sophistries and pretend that we really don’t know.

Feature photo | This photo depicting two people, appearing to be bound, was released the by Department of Defense as part of a long-running ACLU lawsuit relating to CIA torture on February 5, 2015.

The post David Price Takes on the CIA Over Its Secret Torture Program, But Is He Asking the Right Questions? appeared first on MintPress News.