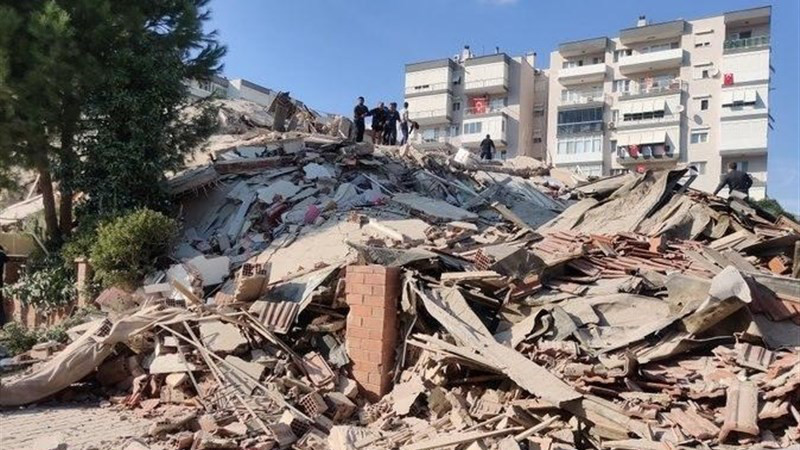 A strong earthquake of magnitude of up to 7.0 struck the Aegean Sea on Friday and was felt in both Turkey and Greece.

People flooded to the streets in the Turkish coastal city of Izmir after the earthquake, witnesses said.

Turkish media showed wreckage of a multiple-story building in central Izmir, with people climbing it to reach rescuers. Smoke was seen in several spots in the city.

Images on social media showed water rushing through the streets of Izmir from an apparent sea surge.

“So far, we have received information about six collapsed buildings” in Izmir province, which includes the city, Turkish Interior Minister Suleyman Soylu said on Twitter.

Environment Minister Murat Kurum said he knew of five collapsed buildings. “Some of our fellow citizens are stuck in the rubble,” he said.

Turkey’s Disaster and Emergency Management Presidency (AFAD) put the magnitude of the earthquake at 6.6, while the US Geological Survey said it was 7.0. It struck at around 11:50 GMT and was felt along Turkey’s Aegean coast and the northwestern Marmara region, local media said.

The epicenter was some 17km off the coast of the Izmir province, at a depth of 16 km, AFAD said. The US Geological Survey said the depth was 10km and the epicenter was 33.5 km off Turkey’s coast.

Ali Yerlikaya, the governor of Istanbul where the quake was also felt, said there were no reports of damage.

The quake was felt across the eastern Greek islands and even in the Greek capital, Athens. Greek media said residents of Samos and other islands fled their homes, while some rockfalls were reported.

There were no immediate reports of injuries. Both countries reported aftershocks.

Turkey’s Izmir province sits on an active fault line. The major North Anatolian fault line generated a deadly earthquake quake near Istanbul in 1999, killing more than 17,000 people in the region.