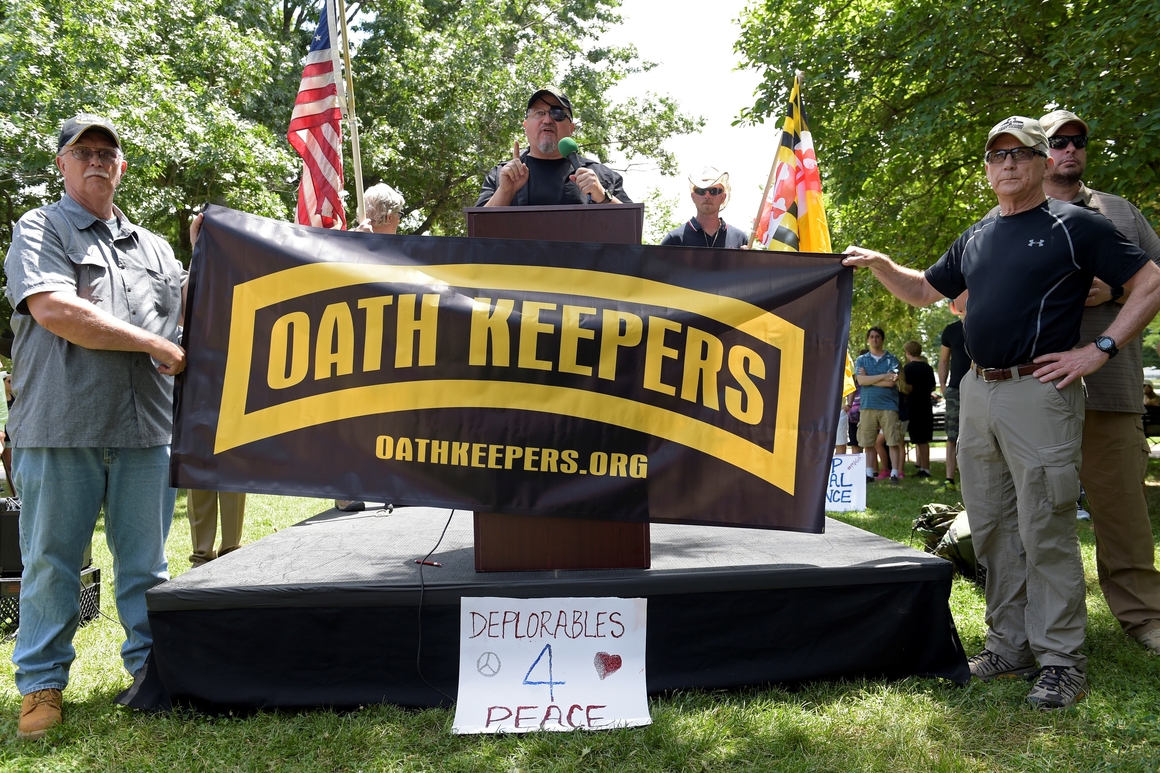 For some far-right militant groups, Election Day represents more than just the moment America chooses its next president. It’s become a rallying cry to prepare for a far-flung prophecy of impending civil war.

The chatter that began among these groups over the summer — primarily over the Black Lives Matter protests, the presence of antifa and coronavirus restrictions — has taken a darker turn in recent weeks. Fueled by allegations of mail-in ballot fraud, shouted from the president’s Twitter feed and conservative media outlets, a new spate of racial justice protests in places like Philadelphia and paranoia over further coronavirus restrictions, some militias have begun doomsday prepping for Election Day.

So far, the rhetoric has largely been inflammatory posturing, threats and showmanship, according to several researchers who monitor online extremism. And despite scattered reports of militia members showing up with guns to polling stations during early voting, there is no sign of the groups presenting a coordinated threat on Election Day.

But a strain of anticipation runs throughout the groups’ chatter, driven by rumblings of potential leftist violence on far-right blogs by conservative cable news personalities. President Donald Trump’s uneven disavowals of these militant groups has only been taken as an endorsement of their chest-thumping.

Some groups — like the Oath Keepers, which recruits from police and military veterans, and Patriot Front, which recruits and trains white supremacist extremists — have been frank, telling their most loyal followers to prepare for war against violent, rioting leftists on that day. During a Thursday appearance with Infowars’ Alex Jones, a conspiracy theorist, Oath Keepers militia leader Stewart Rhodes said the group’s “battle-hardened veterans” would be standing vigil at polling locations to “protect” voters from “coercing and threatening” anti-Trump forces.

Many of these militant groups — which often espouse anti-government, white supremacist and pro-Trump ideologies — are disconnected and diffuse, without large bases of devoted members. But researchers and government officials say they still represent an acute threat. A recent report from the Center for Strategic and International Studies found far-right extremists were behind two thirds of reported terrorist plots and attacks in the U.S. this year. And a recent Department of Homeland Security threat assessment warned white supremacist extremists was the “most persistent and lethal threat in the homeland.”

“The dangerous thing about Election Day is that groups can plan for it,” said Graham Brookie, director of The Atlantic Council’s Digital Forensic Research Lab, a research group that studies the spread of disinformation. “There will be a moment of opportunity and there will be a moment of information about who potentially wins the election or what the conversation is about the results of the election. And they’ll be looking for signals and dog whistles.”

In the runup to this year’s election, Trump and his allies have repeatedly warned the outcome could be easily “rigged” because of the coronavirus-driven rise in mail-in and early voting — a contention not supported by evidence or recent electoral history. By this weekend, nearly 90 million Americans had already cast their ballots — roughly two thirds of the total number of Americans who voted in 2016. The president and his circle have paired these warnings with dire predictions of leftist and antifa street violence, an allegation that dramatically overstates the prevalence of such violence and inaccurately conflates lawful protesting with leftist violence.

Conservative media has hyped these claims, highlighting moments of rioting and looting amid protests in places like Philadelphia, where demonstrators took to the street after police fatally shot a Black man. Conservative outlets like Fox News and OAN have also focused on attacks against police during the protests. The attention has ignored other elements of the civil unrest, including the increased presence of far-right militias.

“Mostly right-wing media is ignoring right-wing militia activity entirely,” said Angelo Carusone, the president of the progressive watchdog Media Matters. “But they are pushing reports of potential left-wing violence and covering reports of [law enforcement officers] prepping for election day violence without specifying a side that it’s coming from.”

And with the election coming up, militia leaders have responded to the possibility of leftist violence by recruiting, training and strategizing should the results not go their way.

“Although there has been occasional chatter regarding poll monitoring, much of the discourse in extremist communities has centered on speculation of what could happen in different election scenarios,” said Jared Holt, formerly of Right Wing Watch and currently a visiting research fellow at the Digital Forensic Research Lab.

While much of this speculation is seen as empty saber rattling, government officials and researchers say these extremist groups, which are frequently aligned with white supremacist ideologies, represent a potent threat. Since 2018, white supremacist extremists “have conducted more lethal attacks in the United States than any other” violent extremist movement, according to the DHS threat assessment. The report did, however, also note “a significant uptick in violence against law enforcement and government symbols in 2020.”

The pandemic has exacerbated these threats, as anti-government movements chafe against restrictions to curb the spread of Covid-19. Federal officials recently arrested a group of extremists who were allegedly training with the intent of instigating a civil war and kidnapping the Michigan governor in retaliation for strict coronavirus protocols.

These frustrations, the DHS report noted, could converge on the electoral process, especially the “open-air, publicly accessible parts” like “polling places and voter registration events.” The report called these places “likely flashpoints for potential violence.”

A recent report from Armed Conflict Location & Event Data Project, in partnership with MilitiaWatch, suggests that one predictive factor for potential militia and street gang activity is whether an area is perceived to be the basis for “leftist coups.” Critical election states like Georgia, Michigan, Pennsylvania and Wisconsin fall into this category, as do traditional hotbeds of militia activity, such as Oregon. Additionally, places with a strong Democratic presence, but not an overwhelming one, tend to be staging grounds for such activity.

Over the past month, the report said there had been robust recruitment and training activities from militia and street gang organizations.

These groups have varying goals. The boogaloo movement, for instance, aims to overthrow the state and is anti-cop. Patriot Front’s goal is to establish a white ethno-state. The Three Percenters are virulently against gun control and share a unanimous antipathy towards the nebulous “radical left,” a hodgepodge of antifa, Black Lives Matter protesters, Democrats and progressives.

There is a high possibility, researchers have noted, that militia posturing around the election will not result in actual demonstrations or violence. But as long as conservative rhetoric focuses on playing up left-wing violence, warned Media Matters’ Carusone, it will help perpetuate militia culture.

“Hyping warnings about potential left-wing violence is significant because that’s what we’re seeing militia groups planning around,” he said. “We are seeing a similar theme in militia/extremist activity — that they’re hyper focused on potential for left-wing groups to become violent on or after the election.”

The feedback loop was on display when Rhodes appeared on Infowars to promote his Oath Keepers’ Election Day activities and predicted a “civil war” in the election’s aftermath.

“It’s not going to be an easy fight for the radical left,” he told Jones. “They’re going to get swamped with very competent, battle-hardened veterans on our side.”

Steven Overly contributed to this report.