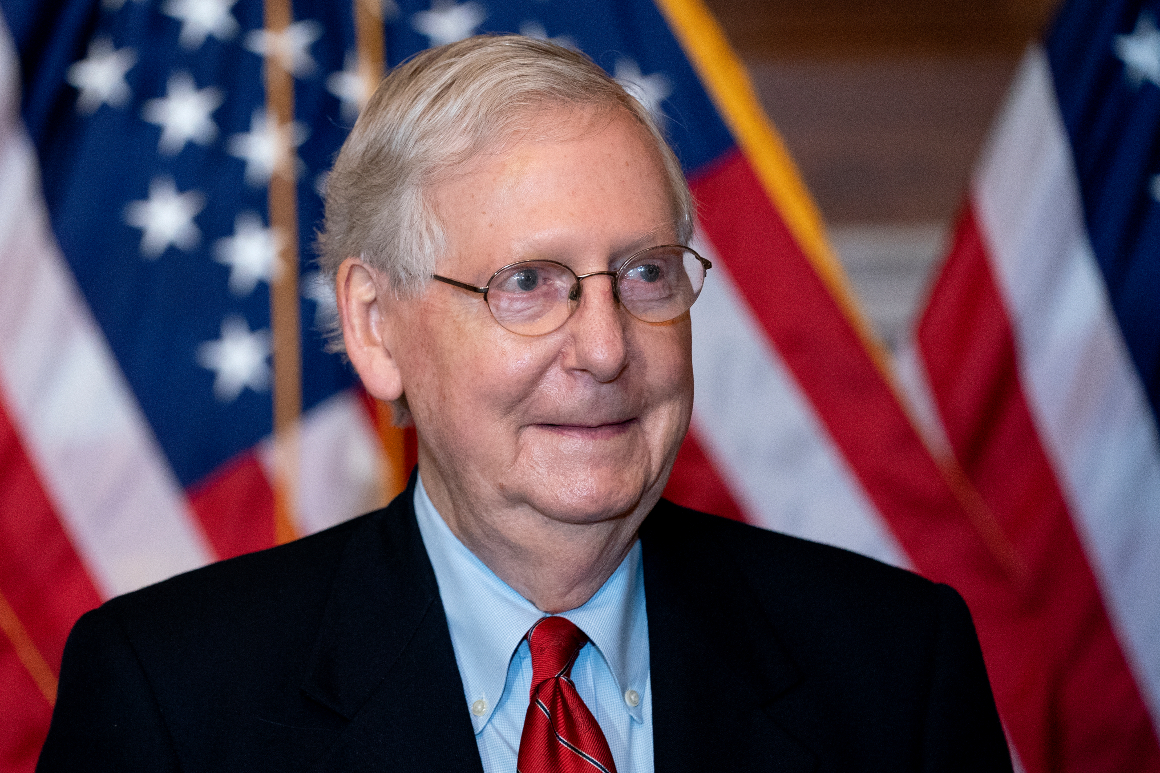 McConnell, like other Republicans, neither repeated Trump’s false claims that Democrats are trying to “rig” and “steal” the election, nor publicly pressured the president to concede. Speaking at a photo opportunity with the new class of GOP senators elected last week, he did not respond to questions about whether he has seen any evidence of fraud, though on the Senate floor, McConnell said Trump is entitled to challenge the validity of the election results as he sees fit.

“Our institutions are actually built for this,” McConnell said. “We have the system in place to consider concerns, and President Trump is 100 percent within his rights to look into allegations of irregularities and weigh his legal options.”

Trump has continued to assert that there were widespread irregularities in several states but has so far provided no evidence. He has falsely claimed on Twitter that he won the election, even as Biden on Saturday secured the necessary 270 electoral votes to win the White House.

Republicans’ reluctance to recognize Biden’s victory highlights the grip that Trump still holds on the GOP, even as he will soon be leaving the White House. For now, they’re sticking with him.


McConnell said there should be “no lectures” from Democrats who “just spent four years refusing to accept the validity of the last election.”

“Notably, the Constitution gives no role in this process to wealthy media corporations,” McConnell. “The projections and commentary of the press do not get veto power over the legal rights of any citizen, including the president of the United States.”

Like McConnell, most Senate Republicans have refused to acknowledge that Biden will become the next president. While Biden is already aggressively planning his transition to power, GOP senators are deferring to the Trump campaign’s pending legal challenges to the election results in various battleground states.

Those long-shot lawsuits, based on unsubstantiated claims of widespread voter fraud, are highly unlikely to alter the results of the election. But Trump campaign adviser Jason Miller said Monday that conceding “is not even in our vocabulary right now,” and the president has been parroting false claims about the integrity of the election.

“I think he’s got a right, a constitutional right to, if there are legal challenges they want to make, and I think everybody ought to let them play out,” Senate Majority Whip John Thune (R-S.D.) said. “Obviously, we’re going to have a result, not for long.”

“Joe Biden won this election fair and square,” Schumer said. “Too many, including the Republican leader, have been silent or sympathetic to the president’s fantasies.”

So far, only four Republican senators — Mitt Romney of Utah, Lisa Murkowski of Alaska, Ben Sasse of Nebraska and Susan Collins of Maine — have acknowledged Biden’s victory and referred to him as the president-elect.


Sen. Chuck Grassley (R-Iowa) said Monday that Trump should not concede yet.

“We’re going to know who is president on December the 14th,” the Iowa Republican said, referring to the date when Electoral College members will vote. “We just better let everything play out.”

Even as Biden’s team is preparing for the transfer of power, a top political appointee in the Trump administration is thus far refusing to officially certify Biden as the president-elect. Such a declaration is necessary to kick-start the presidential transition process; specifically, it would unlock resources for Biden’s team including federal funding and access to the federal agencies that will need staffing.

Republicans have also declined to weigh in on whether the appointee, General Services Administration chief Emily Murphy, should certify Biden as the winner.

Collins went as far as to say on Monday that Biden and Vice President-elect Kamala Harris “should be given every opportunity to ensure that they are ready to govern” when they take office on Jan. 20. But she was largely on an island Monday.

Romney, a frequent critic of the president who didn’t support his reelection, specifically called out Trump’s efforts to dub the election “rigged” and “stolen,” saying that such language emboldens authoritarians around the world and undermines U.S. democratic institutions.

John Bresnahan contributed to this report.