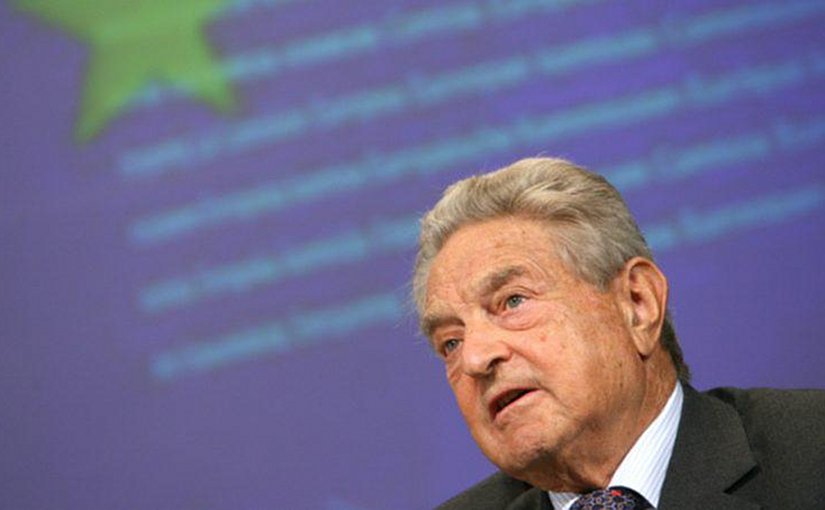 “[W]e must prioritize the fight against global white supremacy and nationalist populism that verges on fascism, both in our own countries and internationally. The rise of xenophobic and ultranationalist populism is not only a domestic threat to our democracies, but it also leads to a dangerously perverted understanding of the world.”

Before joining the Gates camp, Etim served in the Obama administration after stretches at the CIA and the Defense Intelligence Agency during the George W. Bush years. Etim was appointed USAID Assistant Administrator for Africa during the second Obama term and worked on the National Security Council as the Director for African Affairs during the first.

Etim’s war-like phrasings are part of a larger treatise released by the Carnegie Endowment For International Peace, an internationalist think tank that states on its website that it has received “$1 Million and Above” in funding from Soros’ Open Society Foundations. Close Obama ally and former Commerce Secretary Penny Pritzker is Chair of Carnegie’s Board of Trustees. Business execs from Bank of America and Citigroup serve alongside her on the board.

In her submission, Etim emphasizes the need for the “Global North,” meaning North America and Europe, to subsidize the “Global South,” i.e. South America, Africa and Oceania. She conjures the menacing specter of past “colonialism” in an attempt to induce racial guilt as justification for having the U.S. and other Western nations transfer their wealth to the Third World.

“Starving the Global South of attention and resources will not only lead to humanitarian disasters but will also provoke massive security challenges that dramatically impact the Global North too. The Black Lives Matter movement arose out of the specific context of the persistent race-based caste system of the United States. But the movement’s fundamental claim — of the equal dignity and rights of all persons by virtue of their humanity — is one that needs to be driven through our perspectives and approaches to international development as well.”

“[T]he Global North cannot routinely pretend away the rest of the planet — and perhaps no phenomenon demonstrates this point as clearly as migration,” she proclaims.

Showing that her intelligence ties to the Bush administration are no coincidence, Etim resorted to similar language in a 2017 article for the George W. Bush Institute, again identifying the Trump movement as a threat to democracy itself:

“American democracy is at a crossroads. The barrage of actions against it by hostile powers and the executive branch’s increasingly charged rhetoric against the very institutions charged with safeguarding our democratic system (the media and the judiciary) could result in two distinct outcomes.

The first involves our nation grappling with the original sins of our country’s foundation (slavery, the rights of women, and the treatment of indigenous people) and working to bolster democracy for future generations. The second path is the erosion of public confidence in our institutions, and more sophisticated attacks on our information systems and corporations by Russia and China.”

Does anyone still not understand why Bush has already congratulated Biden on his thoroughly unproven election “victory” even as the overwhelming majority of grassroots Republicans are fully aware that if the ballot shenanigans in key battleground states like Michigan and Pennsylvania are allowed to stand the GOP can likely never hope to win a presidential election again?

Etim’s revolutionary prose is hardly out of place on Team Biden. Liberty Nation reported in September that multiple leading names on Biden’s A-List of foreign policy advisers are directly tied to an organization that has officially endorsed a radical “action paper” titled “Toward a Feminist Foreign Policy in the United States.” Members of the heavily Biden-aligned group Foreign Policy For America even played a key role in crafting the paper.

The document was produced with the help of “contributing” individuals from Soros’ Open Society Foundations, Planned Parenthood, and the globalist Council on Foreign Relations.

Simon Clark is Chairman of the Board of Directors at Foreign Policy For America. On July 1, he wrote an inflammatory article for the Center for American Progress, a leftist group that is also financially backed by George Soros.

Luridly titled “How White Supremacy Returned to Mainstream Politics,” the piece openly paints any support for President Trump’s efforts to enforce the immigration laws of this nation as xenophobic, racist Nazism.

“As many commentators have noted, President Trump’s claim that immigrants will ‘infest our Country’ directly echoes Nazi propaganda and other precursors to genocidal violence,” Clark wrote.

Clark went on to describe any opposition to illegal immigration as white supremacy:

“I promise you this: I will be a president for all Americans — whether you voted for me or not,” Biden has stated as he desperately tries to maneuver into president-elect mode despite the growing waves of red flags signaling election fraud engulfing the 2020 vote.

Rather than trust him, or the dodgy methods that have given him his thoroughly unconvincing “triumph,” Americans are best advised to believe the words of his handpicked associates.

*About the author: Political Columnist at LibertyNation.com Joe Schaeffer is a veteran journalist with 20+ years’ experience. He spent 15 years with The Washington Times, including 8+ years as Managing Editor of the newspaper’s popular National Weekly Edition. Striving to be a natural health nut, he considers staring at the ocean for hours to be an act of political rebellion.

Source: This article was published by the Liberty Nation