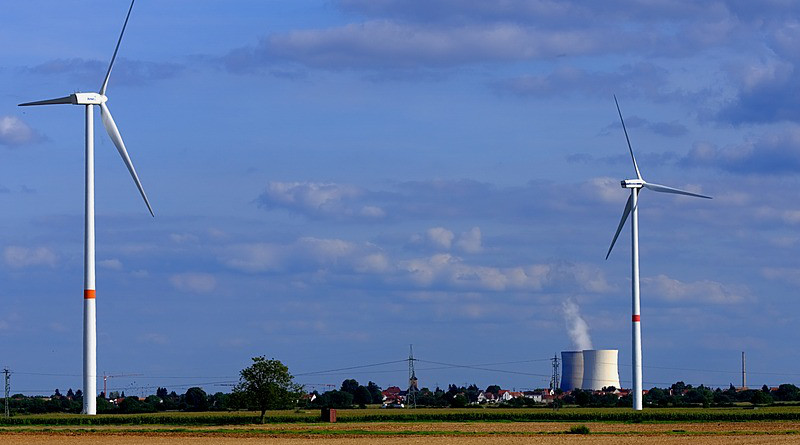 It is now seventy-five years since the U.S. ended the war against Japan by dropping nuclear bombs on Hiroshima and Nagasaki (both currently thriving). Eight years later, President Eisenhower, in his world-famous “Atoms for Peace” speech before the United Nations, invited citizens to the debate over using nuclear science and technology for power generation.

President Kennedy switched the nation’s attention from nuclear to the space program but, beginning in the Nixon Administration and augmented following the 1973 oil embargo through the Three Mile Island incident in 1979, the U.S. authorized most of the 61 plants and 99 nuclear reactors still operating in 2017.  As President Trump took office, the Aspen Institute issued a report stating, “Nuclear power in the U.S. is at a moment of existential crisis. If the present challenges are not addressed, the future of nuclear energy may be far less promising and superior U.S. nuclear expertise diminished.”

President Obama’s Clean Energy Plan provided funding for nuclear energy, including creating the Gateway for Accelerated Innovation in Nuclear (GAIN). In 2012, despite objections by the chairman, the Nuclear Regulatory Commission (NRC) authorized Southern Company to build and operate two new reactors at its Vogtle nuclear power plant in Georgia, the first in the USA since 1979.

The Aspen report boldly asserted that the U.S. needs a strong domestic nuclear program to maintain its exceptional competence to address safety, threat reduction, and nonproliferation issues. They courted the environmental community by noting that nuclear is a necessary component in the war against climate change, if we are to also maintain an adequate supply of affordable electricity. “A world without nuclear power,” the authors concluded, “would require an incredible – and likely unrealistic – amount of renewables to meet climate targets.”

The Aspen authors observed that Americans are generally supportive of nuclear power but concerned about nuclear waste. Worse, far too many nuclear power plants in development have broken budgets and fallen behind schedule. Given the lack of political will or a national energy crisis at the time, the authors placed their hopes on advanced reactors that use new types of coolants, operate at different pressures and temperatures, or are smaller and more modular.

Many now view nuclear waste as an overhyped, unscientific issue. In a 2019 paper, Aspen Institute trustee Bill Budinger argued that the fear of nuclear waste is largely unfounded – an issue “hugely exaggerated when we were trying to scare people away from nuclear.” The total amount of nuclear waste accumulated over the past 60 years from all U.S. nuclear power plants would fit inside a two-story building covering one city block. Unfounded fear applies to power plant radiation, as well.

Cost overruns and delays are largely the product of anti-nuclear attitudes that have driven regulation to extremes that are inappropriate for newer reactor designs.

In November, the Associated Press reported that the Idaho National Laboratory was the Energy Department’s first choice for constructing and operating the Versatile Test Reactor (VTR). This first new test reactor built in the U.S. in decades would give the nation a dedicated “fast-neutron-spectrum” testing capability. Energy Secretary Dan Brouillette explained that the VTR “continues to be a high-priority project for DOE to ensure nuclear energy plays a role in our country’s energy portfolio.”

Meanwhile, Llewellyn King reports that an active community of entrepreneurs is promoting reactors of various designs (including molten salt modular reactors), using seed money for SMRs provided through the Obama-era GAIN program. The increase in private investment in nuclear technology and development is a strong sign that nuclear may have finally overcome the media-induced stigma resulting from Three Mile Island, Chernobyl, and Fukushima.

In reality, the Chernobyl accident happened largely because a test procedure started going wrong when senior technicians were off duty and less experienced technicians made wrong decisions that rapidly compounded the disaster, nuclear physicist Kelvin Kemm explains. Environmentalist Michael Shellenberger notes that radiation from Chernobyl “will kill at most 200 people, while the radiation from Fukushima and Three Mile will kill zero people.” Moreover, despite the fact that hundreds of thousands of women aborted their babies after the Chernobyl incident, UCLA researchers found that children born near Chernobyl had no detectable abnormalities.

Under ANIA, the Department of Energy may only buy uranium recovered from facilities licensed by the Nuclear Regulatory Commission or equivalent agreement state agencies; uranium from companies owned by, controlled by or subject to the jurisdiction of Russia or China would be excluded.

According to several prognosticators, the presumed Biden Administration will carry on or even accelerate Obama and Trump efforts to revitalize and prioritize U.S. nuclear energy programs. The primary difference between Trump and Biden nuclear policies, says progressive policy analyst James Conca, is that Biden’s is part of a climate change agenda, while Trump’s focus was on national security concerns.

“Leading climate scientists” say we cannot address climate change without significant nuclear power, Conca contends. So supporting nuclear power – or not – is a clear signal about how serious candidates are about manmade climate change and “how serious they are about supporting science over mere activism.” He added, “if Democrats want any clean energy plan to succeed at all, it better include nuclear.”

Washington Examiner energy reporter Josh Siegel says “Biden’s support for nuclear power … promises to be one of the rare instances of energy policy continuity between the incoming and outgoing administrations.” Democrats, he believes, finally realize that wind and solar alone are insufficient to decarbonize the power grid and are starting to give up their longstanding opposition to nuclear energy.

Of course, all this will also require a new reality-based public attitude about the risks of radiation, be it from nuclear power plants, nuclear waste storage or other sources, says energy journalist Robert Bryce.

There is one more huge caveat. Should Kamala Harris for any reason replace Biden as Commander-in-Chief, her support for nuclear power is far less assured. Asked during the 2020 Presidential campaign whether she supported nuclear energy, she replied on multiple occasions:“Yes, temporarily, while we increase investment into cleaner renewable alternatives.”

That’s not exactly a ringing endorsement, nor even an acknowledgment of the growing bipartisan energy reality. And it certainly doesn’t explain how millions of wind turbines, billions of solar panels, billions of battery modules – and massive increases in mining, metals processing and manufacturing, to build those technologies – are “clean, green, renewable or sustainable” alternatives to fossil fuels.

*Duggan Flanakin is Director of Policy Research at the Committee For A Constructive Tomorrow (www.CFACT.org)