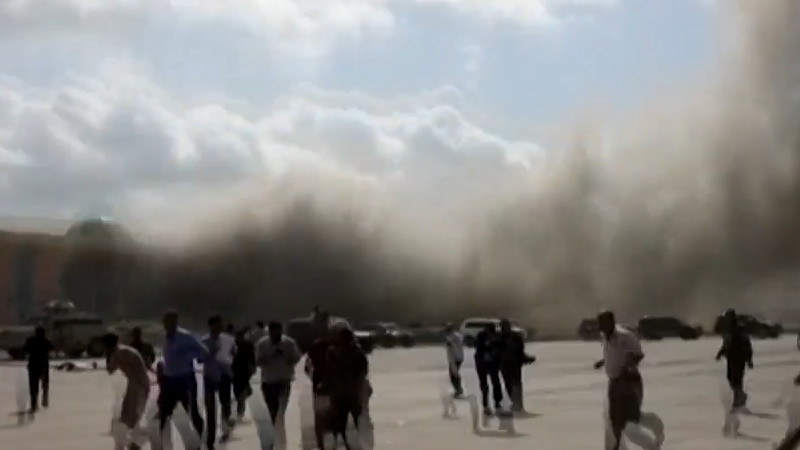 During the first meeting of his government in Aden, Yemeni Prime Minister Maeen Abdul Malik Saeed said initial information showed that military experts from Iran had launched the guided missiles that hit Aden airport killing or wounding dozens of people.

“When we talk about the Houthis, we talk about Iran’s destructive scheme in the region,” the premier said, while visiting some of the wounded in hospital, adding that the attack had made his government “even more determined” to defeat the Houthis, press ahead with the Riyadh Agreement and address the country’s main issues.

“This terrorist attack will not achieve the goals of those who carried it out and who sought to obstruct the implementation of the Riyadh Agreement,” the official news agency quoted the prime minister as saying.

Dr. Qasem Buhaibeh, Yemen’s health minister, said on Twitter that 25 people were killed that that number may rise, since several of the 110 wounded are in critical condition.

The International Committee of the Red Cross (ICRC) said three of its workers died in the attack — two Yemenis and a Rwandan. “A day like this adds even more grief both for the Red Cross family and for the Yemeni families who had loved ones killed or injured in this explosion,” said Dominik Stillhart, ICRC’s director of operations.

The Yemeni Journalist Syndicate said one Yemeni journalist had been killed in the attack and 10 more wounded.

Yemen’s Foreign Ministry blamed the Houthis for the attack, pointing out that the same technology and techniques had been employed in previous attacks by the militia across Yemen.

Maj. Gen. İbrahim Ali Haydan, the new interior minister, said the Houthis were responsible for the attack and that the investigation he is heading up would reveal more details.

Official media reported that Yemenia, the country’s flagship carrier, had diverted flights from Aden to Seiyun airport in the southeastern province of Hadramout.

On Wednesday night, the Arab coalition launched retaliatory strikes on Houthi military sites in the capital, Sanaa, and surrounding areas, including Al-Dailami airbase.

Cale Brown, the US State Department’s deputy spokesperson, condemned the attack on Aden’s airport and expressed his country’s sympathy and support for the Yemeni people and their government. “The attacks were timed with the arrival of new leaders of the legitimate Yemen government, but they will not thwart efforts to bring lasting peace to Yemen. We stand with the Yemeni people,” Brown said on Twitter.

“The main beneficiaries of this attack are the Houthis and the enemies of the Riyadh Agreement,” Yasser Al-Yafae, a political analyst based in Aden, told Arab News. “Iran wants to send a message to Saudi Arabia through its tools (in Yemen) that it is strong and can foil the Kingdom’s gains in the country.”

Najeeb Ghallab, undersecretary at Yemen’s Information Ministry and a political analyst, told Arab News that the Houthis quickly denied their involvement in the attack to create uncertainty and infighting among the Yemeni forces. “The Houthis know that if the government succeeds in addressing problems and unifying forces, they will be isolated,” he said.