This story is part of an ongoing collaboration between ProPublica and FRONTLINE that includes an upcoming documentary.

The invasion of the U.S. Capitol on Wednesday was stoked in plain sight. For weeks, the far-right supporters of President Donald Trump railed on social media that the election had been stolen. They openly discussed the idea of violent protest on the day Congress met to certify the result.

“We came up with the idea to occupy just outside the CAPITOL on Jan 6th,” leaders of the Stop the Steal movement wrote on Dec. 23. They called their Wednesday demonstration the Wild Protest, a name taken from a tweet by Trump that encouraged his supporters to take their grievances to the streets of Washington. “Will be wild,” the president tweeted. 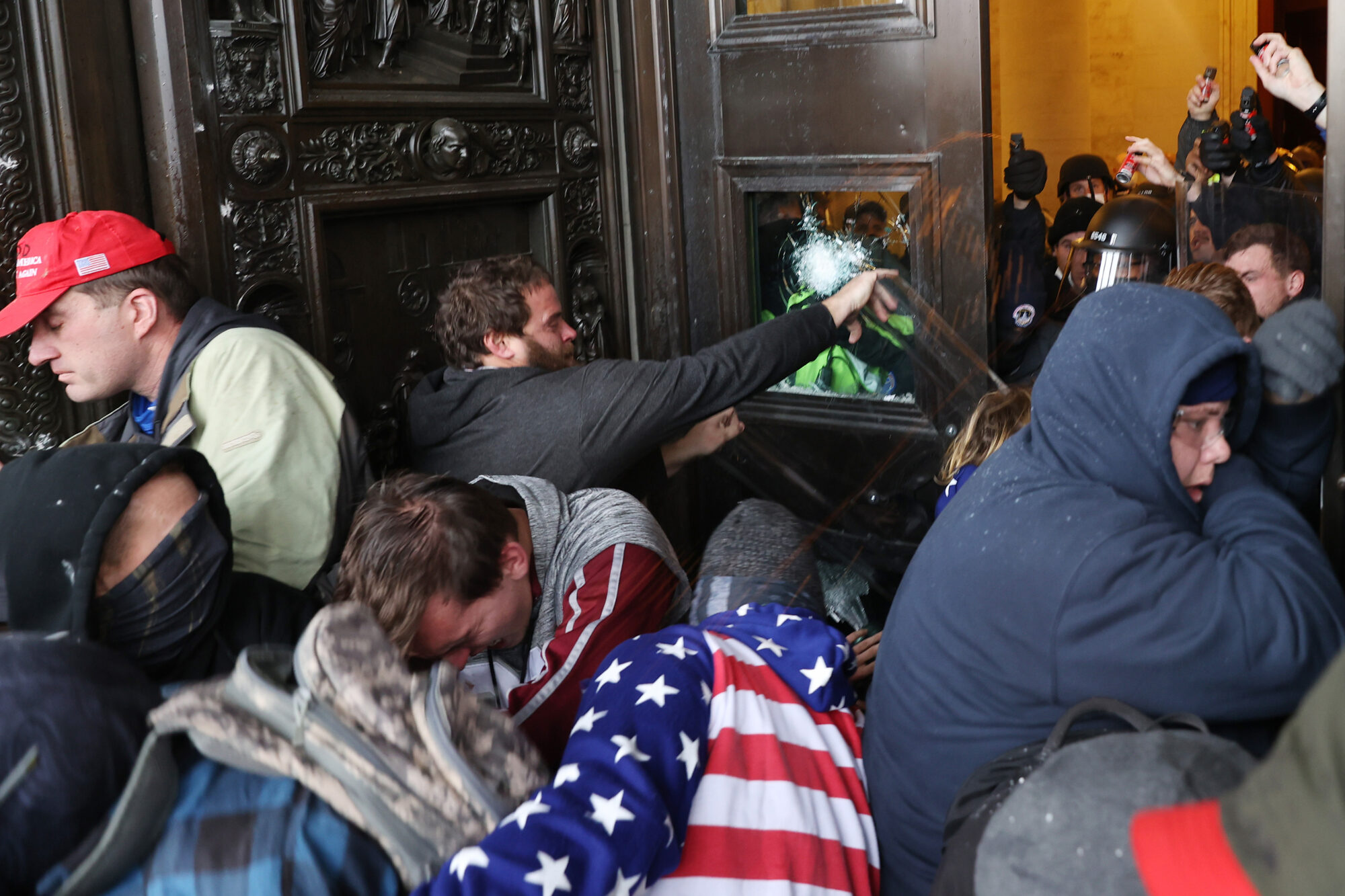 Trump supporters storming the doors of the Capitol on Wednesday.
Tasos Katopodis/Getty Images

Ali Alexander, the founder of the movement, encouraged people to bring tents and sleeping bags and avoid wearing masks for the event. “If D.C. escalates… so do we,” Alexander wrote on Parler last week — one of scores of social media posts welcoming violence that were reviewed by ProPublica in the weeks leading up to Wednesday’s attack on the capitol.

Never miss the most important reporting from ProPublica’s newsroom. Subscribe to the Big Story newsletter.

Thousands of people heeded that call.

For reasons that remained unclear Wednesday night, the law enforcement authorities charged with protecting the nation’s entire legislative branch — nearly all of the 535 members of Congress gathered in a joint session, along with Vice President Mike Pence — were ill-prepared to contain the forces massed against them.

On Wednesday afternoon, a thin line of U.S. Capitol Police, with only a few riot shields between them and a knot of angry protesters, engaged in hand-to-hand combat with rioters on the steps of the West Front. They struggled with a flimsy set of barricades as a mob in helmets and bulletproof vests pushed its way toward the Capitol entrance. Videos showed officers stepping aside, and sometimes taking selfies, as if to usher Trump’s supporters into the building they were supposed to guard. 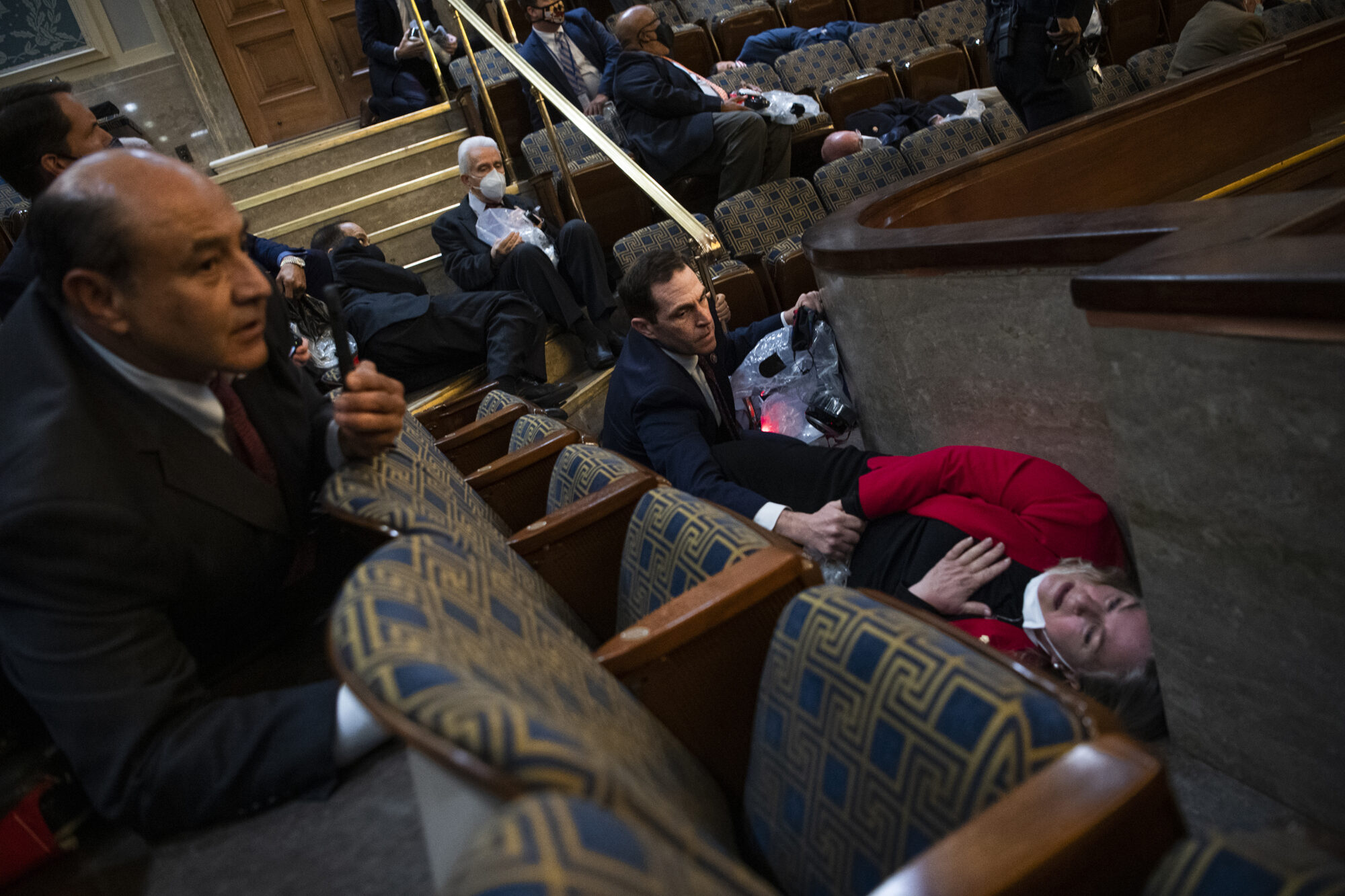 A former Capitol policeman well-versed in his agency’s procedures was mystified by the scene he watched unfold on live television. Larry Schaefer, a 34-year Capitol Police veteran who retired in December 2019, said his former colleagues were experienced in dealing with aggressive crowds.

A spokesperson for the Capitol Police did not respond to a request for comment.

In recent years, federal law enforcement agencies have stepped up their focus on far-right groups, resulting in a spate of arrests. In October, the FBI arrested a group of Michigan extremists and charged them with plotting to kidnap the state’s governor. On Monday, Washington police arrested Enrique Tarrio, the leader of the far-right group the Proud Boys, on charges of burning a Black Lives Matter banner.

Conversations on right-wing platforms are monitored closely by federal intelligence. In September, a draft report by the Department of Homeland Security surfaced, identifying white supremacists as the biggest threat to national security.

On Dec. 12, a poster on the website MyMilitia.com urged violence if senators made official the victory of President-elect Joe Biden.

“If this does not change, then I advocate, Revolution and adherence to the rules of war,” wrote someone identifying themselves as I3DI. “I say, take the hill or die trying.”

Wrote another person: “It’s already apparent that literally millions of Americans are on the verge of activating their Second Amendment duty to defeat tyranny and save the republic.”

The easily overpowered police force guarding the Capitol on Wednesday posed a stark contrast to the tactics deployed by local police during this summer’s Black Lives Matter protests. Then, the city felt besieged by law enforcement. 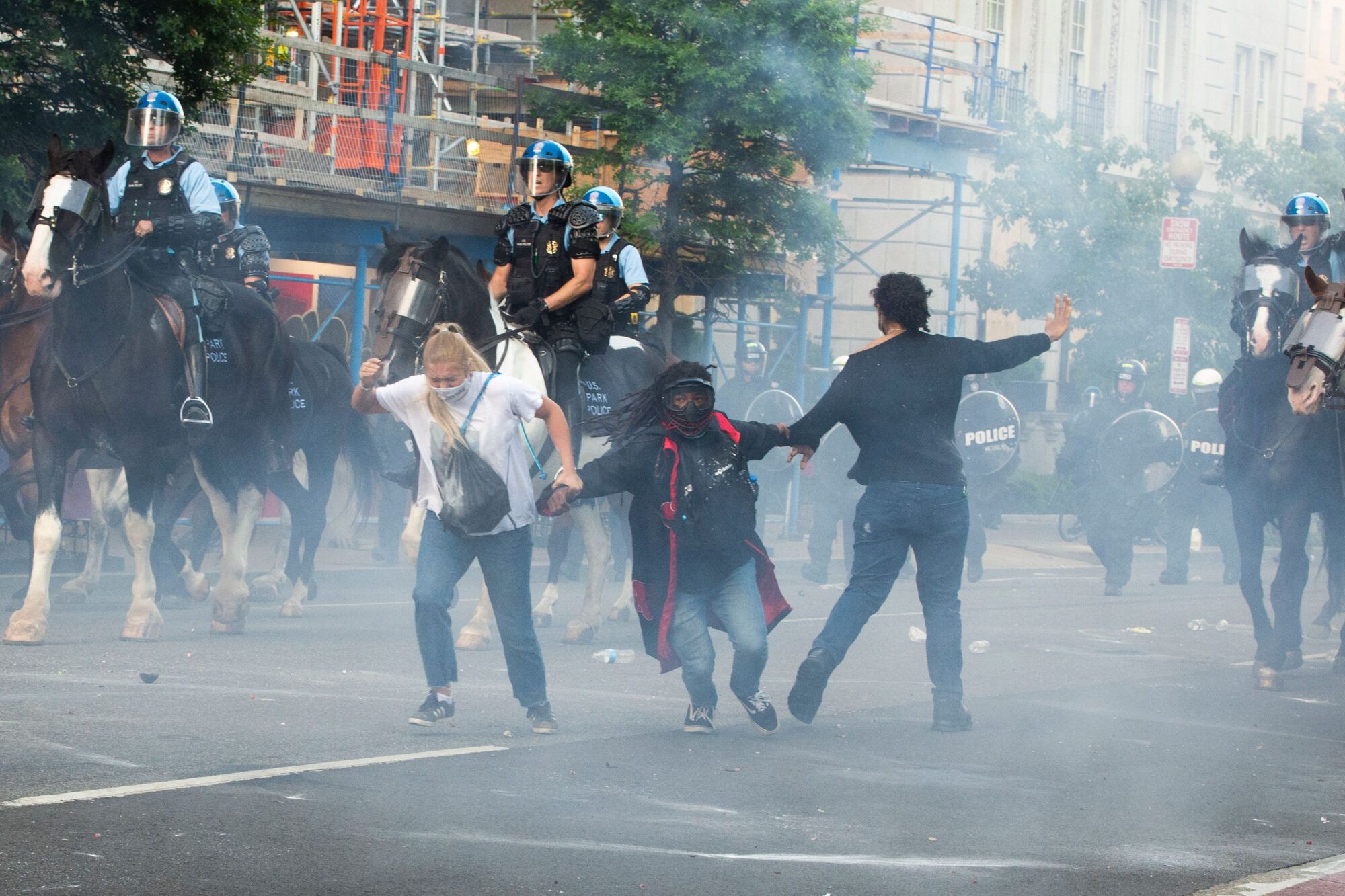 Protesters are tear-gassed as the police disperse them near the White House on June 1.
Roberto Schmidt/AFP/Getty Images

On June 1, following a few days of mostly peaceful protests, the National Guard, the Secret Service and the U.S. Park Police fired tear gas and rubber bullets to disperse a nonviolent crowd in Lafayette Square outside the White House to allow Trump to pose with a Bible in front of a nearby church.

“We need to dominate the battlespace,” then-Secretary of Defense Mark Esper said on a call with dozens of governors, asking them to send their National Guard forces to the capital. 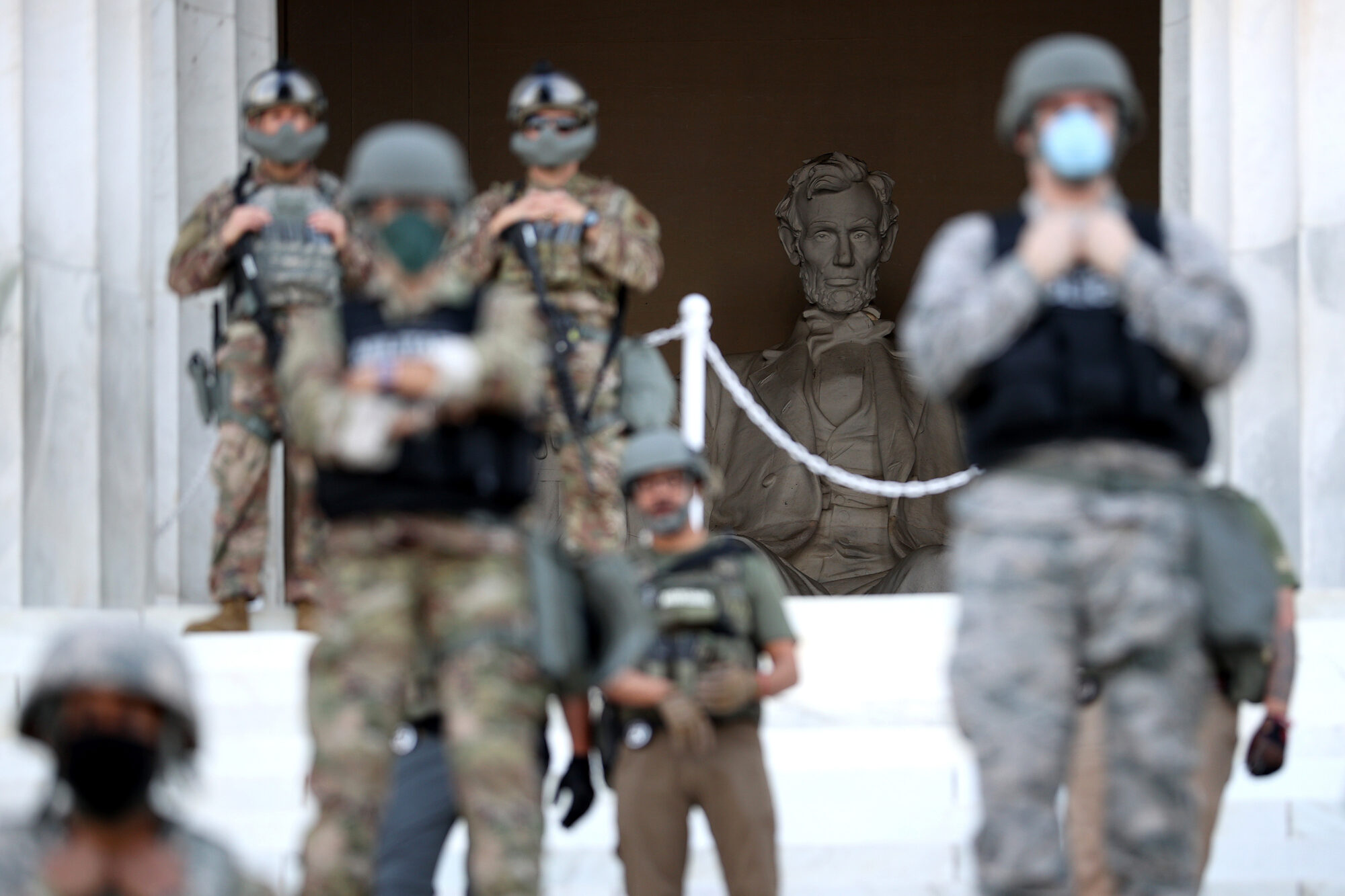 Members of the D.C. National Guard on the steps of the Lincoln Memorial in Washington on June 2 monitoring demonstrators during a peaceful protest against police brutality and the death of George Floyd, who died in police custody.
Win McNamee/Getty Images

On June 2 — the day of the primary election in Washington — law enforcement officers appeared on every corner, heavily armed in fatigues and body armor. Humvees blocked intersections. Buses full of troops deployed into military columns and marshaled in front of the Lincoln Memorial in a raw show of force. Police kettled protesters in alleys. Choppers thudded overhead for days and sank low enough over protesters to generate gale-force winds.

Such dominance was nowhere in evidence Wednesday, despite a near-lockdown of the downtown area on Tuesday night. Trump supporters drove to the Capitol and parked in spaces normally reserved for congressional staff. Some vehicles stopped on the lawns near the Tidal Basin. 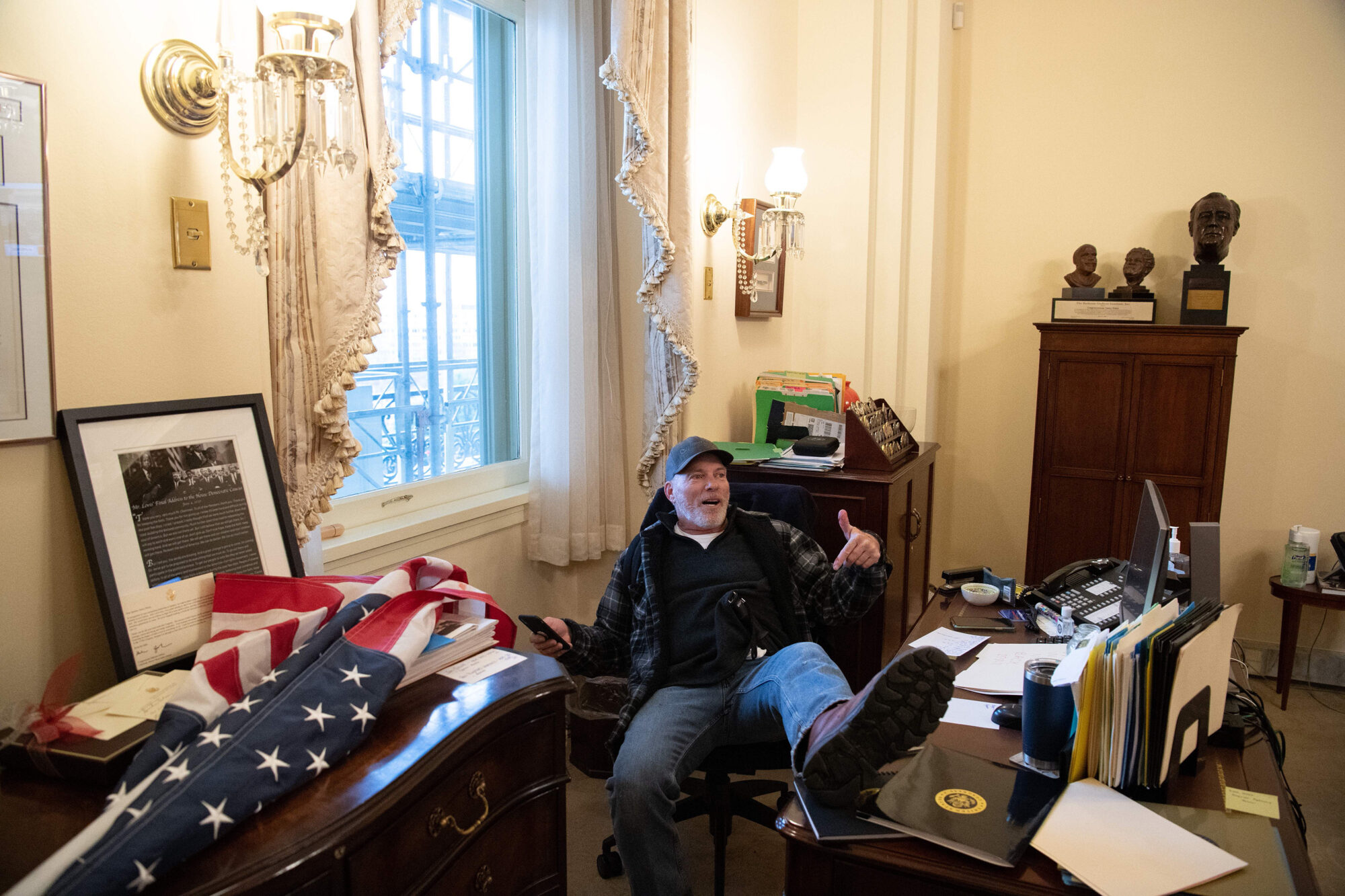 A Trump supporter who breached the Capitol sits inside the office of House Speaker Nancy Pelosi as insurrectionists halted congressional debate of the electoral vote certification.
Saul Loeb/AFP via Getty Images 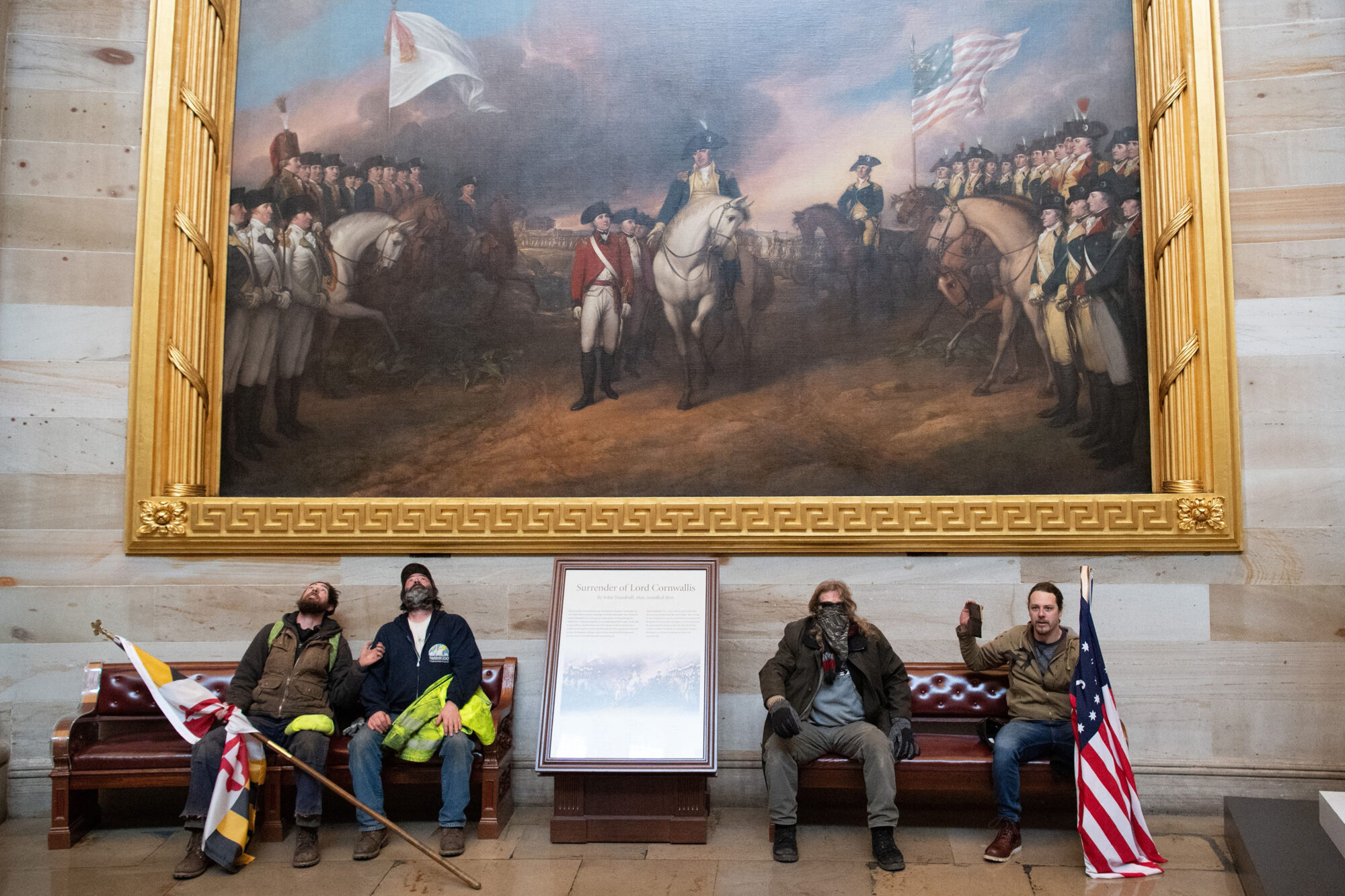 Insurrectionists in the rotunda of the Capitol on Wednesday after breaching security.
Saul Loeb/AFP via Getty Images

The contrast shook Washington’s attorney general, Karl Racine, who seemed to be almost in disbelief on CNN Wednesday evening.

“There was zero intelligence that the Black Lives Matter protesters were going to ‘storm the capitol,’” he remembered, after ticking down the many police forces present in June. “Juxtapose that with what we saw today, with hate groups, militia and other groups that have no respect for the rule of law go into the capitol. … That dichotomy is shocking.”

The question of how law enforcement and the national security establishment failed so spectacularly will likely be the subject of intense focus in coming days.

David Carter, director of the Intelligence Program at Michigan State University, said that sometimes, the best intelligence in the world doesn’t translate into adequate preparedness. Perhaps the security officials responsible for protecting the Capitol simply could not envision that a crowd of Americans would charge through a police line and shatter the glass windows that stood as the only physical barrier to entering the building.