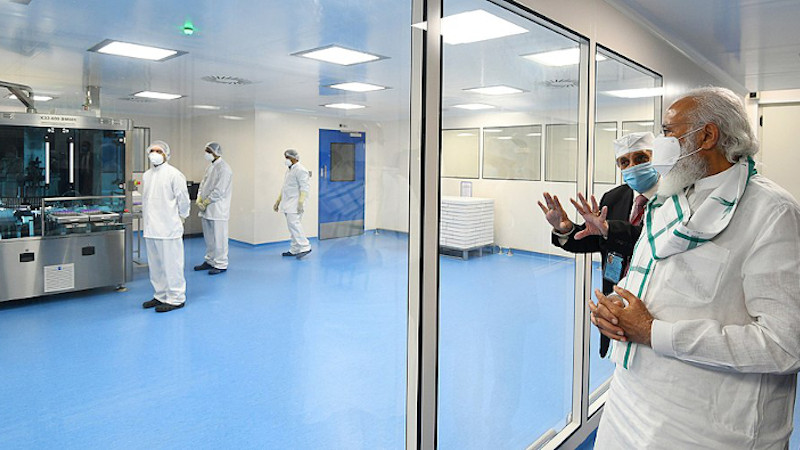 Speaking at the first UN General Assembly Session he attended in September 2014, Prime Minister Narendra Modi stated that India’s foreign policy is governed by its age-old maxim of ‘’Vasudhaiva Kutumbakam’’ (The World is One Family).

As soon as the coronavirus hit the world, India emphasised the imperative of collaboration to overcome the inimical health and economic impact of the virus. It was with this objective that the Indian government organised a virtual meeting of SAARC leaders on March 15, 2020. A SAARC Fund to combat the disease was established, with India contributing an amount of $10 million.

In the initial months of the pandemic, India, by virtue of the fact that it is the ‘pharmacy of the world’, ramped up production of essential medicines like hydroxychloroquine, paracetamol etc. as well as Personal Protection Equipment (PPE) kits, ventilators and masks. It should be noted that at the start of the pandemic, India’s production capacity to manufacture such equipment was negligible. However, India was very quickly able to significantly augment its production competence to not only meet its own domestic requirements but also emerge as a significant exporter of these items.

The United Nations (UN) and the World Health Organization (WHO) failed miserably to provide leadership in dealing with this crisis. The UN Security Council (UNSC) could not meet in March 2020 because China was chairing the body and did not want questions to be raised on its actions of deception and hypocrisy, after the virus first erupted in Wuhan and spread around the world. Even when the UNSC met to discuss the issue in April 2020, it could not agree on any concrete course of action because of deep divisions amongst the members.

Speaking on the occasion of the 75th anniversary of the UN in September 2020, PM Modi pointed out that the world body faced a ‘crisis of confidence’ as it operated on outdated structures. On the same occasion, Modi affirmed that India’s vaccine production capacity will be used to help humanity in fighting the virus.

India produces 60 per cent of all vaccines manufactured in the world. The head of the WHO recently complained that the developed countries monopolised the Pfizer and Moderna vaccines for their own populations and were not making them available to developing countries.

In accordance with the ‘Neighbourhood First’ policy enunciated by Modi at the beginning of his first term in 2014, Bhutan and Maldives became the first two countries to receive 150,000 and 100,000 vaccines respectively, on January 20, 2021. Bangladesh and Nepal received two million and one million doses on January 21. Myanmar received 1.5 million doses, Seychelles 50,000 doses, and Mauritius 100,000 doses on January 22.

The two million doses gifted by India to Bangladesh were the single largest consignment of vaccines provided by India to any country thus far, prompting the Bangladesh Health minister to comment that India had stood by his country during the Liberation War of 1971 as well as during the pandemic. Bangladesh was supposed to get 110,000 doses of free vaccines from the Chinese firm Sinovac Biotech, but its reluctance to contribute towards the development cost of the vaccine, led to a deadlock.

India’s vaccine assistance reached Nepal within a week of a request made by Nepalese Foreign Minister during his visit to New Delhi on January 15, 2021. India’s gesture to Nepal came at a time when its ties have been strained by a territorial dispute as well as concerns over China’s expanding political and economic influence in the Himalayan nation. China, which had promised Nepal help to deal with the pandemic, is yet to receive Nepali clearance for its Sinopharm shots.

It is pertinent to flag that there is huge demand for vaccines in some of the above mentioned countries who are desperate to revive their tourism-dependent economies. This has provided an important opportunity for the Indian government to expand and strengthen its outreach.

All the above vaccine supplies by India were made on a gratis basis. Several of these countries are among the reportedly 90 countries including South Africa, Saudi Arabia, UAE and a host of others that have signed commercial agreements with Indian manufacturers, supplies pursuant to which will be made in the coming days.

Regulatory approvals by Afghanistan are awaited to effect supplies to it. Shipment of 500,000 doses to Sri Lanka was effected on January 27, 2021. India has also conducted training programmes for its neighbours to help them in the vaccination drive.

Apart from countries in India’s immediate and extended neighbourhood, Brazil and Morocco, close strategic partners, also got 2 million doses each on January 22. Brazilian President Jair Bolsonaro thanked PM Modi for sending the vaccine supplies and equated the gesture with that of Lord Hanuman bringing the holy ‘Sanjeevani’. PM Roosevelt Skerrit of Dominican Republic called for assistance from India ‘with great humility and respect … to make our population safe’.

The US State Department, the WHO, Bill Gates and several others have spoken warmly and appreciatively of the selfless manner in which India is helping several developing countries with the vaccines.

India’s ‘Vaccine Maitri’ Mission appears to have taken China by surprise and put it on the back foot. Global Times, the mouth piece of the Chinese Communist Party, has started spreading lies and making disparaging remarks about the safety, efficacy and capacity of India to produce vaccines in adequate numbers. This is even as countries like Cambodia, Nepal and Bangladesh have refused to take China’s vaccines because of quality concerns or terms of supply.

China’s ‘iron friend’ Pakistan, meanwhile, has been informed that it could send its aircraft to Beijing to airlift 500,000 doses of the vaccine. This is in stark contrast to the dispatch effected by India to Nepal and Bangladesh in Air India special flights. Brazil which had also imported Chinese vaccines, is wary of using them because it finds that their efficacy is just around 50 per cent, which is much lower than all other vaccines in use in the world.

What has been particularly appreciated by observers is the rapidity and selflessness with which India rolled out millions of doses as aid despite the massive requirements of its own vaccination drive. While the world is witnessing the aggressive and threatening demeanor of China, the humane and caring attitude of India, in stark contrast, is evident. In the rapidly evolving global geo-political landscape, the healing and supportive actions by India through supply of Covishield and Covaxin vaccines will have a huge impact in promoting peace, security, cooperation and prosperity in the region and the world. India’s ‘Vaccine Maitri’ initiative has further strengthened its image as the first responder in emergency situations. This is all the more commendable when there are only five countries in the world who have thus far been able to successfully manufacture Covid-19 vaccines.

Views expressed are of the author and do not necessarily reflect the views of the Manohar Parrikar IDSA or of the Government of India.

*About the author: Ashok Sajjanhar is President, Institute of Global Studies, and a former Ambassador of India to Kazakhstan, Sweden and Latvia.

Source: This article was published by Manohar Parrikar IDSA